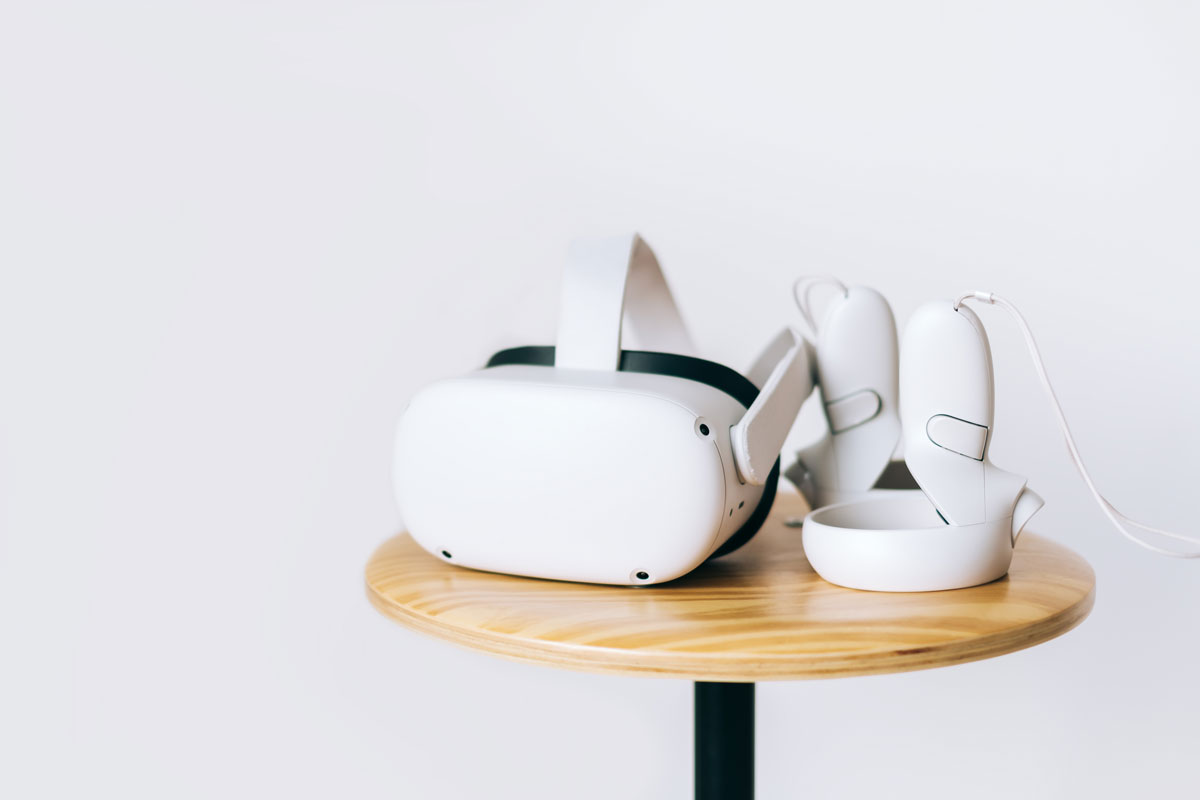 With standalone VR becoming popular, new competitors started appearing, and last year saw the launch of the Pico Neo 3 Pro - a version of the Chinese Pico Neo 3 headset tailored to enterprises and marketed in Western countries.

Its specifications are uncannily similar to the Quest 2, but it offers some extra features, like direct DisplayPort connection and Nvidia Cloud XR support. The fact that the Pico headsets do not require any account (as opposed to Oculus Quest devices, which require a Facebook account to work)  makes them attractive not only to enterprises. But how does the Pico Neo 3 Pro stack against the Oculus Quest 2 itself? Let’s find out.

The Oculus Quest 2 comes with an unremarkable strap. It takes little space and keeps the device in front of your face. The downside of it is that the strap is not particularly comfortable or stable when wearing the device.

The Pico Neo 3 Pro comes with something similar to the optional Quest 2 elite strap. It includes a back cushion and a dial for tightening. It’s definitely more stable than the one on the Quest 2. It’s worth noting that the battery is placed at the back of the head which ensures that the VR headset is better balanced, being less front-heavy than the Quest 2, while also having a larger battery.

The face cushion on the Pico presses hard on my forehead, getting uncomfortable after about one hour. I offset this by tightening the headset a bit less or shifting it, but it’s not a great solution. The one on the Quest 2 feels softer and more comfortable.

The material of the Pico’s face cushion is easy to clean with a wipe, which can be an important feature for an enterprise headset used by different people. The foam cushion of the Oculus Quest 2 is not as easy to clean as it is made of foam, so it would need an aftermarket part to work in a context where it is worn by multiple people, therefore requiring regular cleaning.

Both headsets offer three similar fixed positions for IPD adjustment - 58, 63.5 and 69 mm on the Pico and 58, 63 and 68 mm on the Quest 2. On the Quest, the widest IPD setting seems to get close to the edges of the screen, resulting in those  restricting the outer area of the field of view.

A downside of the Pico controllers is that they don’t have touch functionality, so they can’t tell if a finger is resting on a button like the Quest does.

Tracking works great in both cases. The tracking arc is wide in both headsets and the controllers don’t lose tracking when hidden behind the other hand. The Oculus controllers seem a little more precise, as they wobble a little less when standing still.

Also, Oculus supports hand tracking since the first Quest, while this feature is not yet available on the Pico Neo 3 Pro. Pico plans to release a hand tracking feature  by the end of April 2022, but we will have to wait and see.

The Oculus Quest 2 and the Pico Neo 3 Pro have similar screens. Both use single LCD screens with a resolution of 1832x1920. Whereas the Pico is limited to 72-90 Hz, the Oculus can go up to 120 Hz. A higher refresh rate means a potentially smoother experience at the expense of battery life and processing power. The field of view is subjectively very similar. Pico lists 98 degrees, Oculus does not provide an official figure.

The Pico Neo 3 Pro now also supports 120 Hz in its experimental settings, putting it on par with the Oculus on that front.

The image quality is comparable in terms of sharpness and visible pixels; overall the Quest 2 seems to have a more consistent image at the edges of the field of view, where the Pico Neo 3 Pro shows more visible chromatic aberration.

Render performance should be similar since both headset have identical system specs, a Qualcomm XR2 SoC paired with 6 GB of RAM.

One noticeable problem with the Pico headset is that the shape of an object distorts slightly when moving across the lens. This is not hugely distracting, but it can become annoying if you fixate on it.

Headset tracking is pretty good in both cases, but I found the Quest 2 smoother when moving the head quickly from left to right.

Both the Pico Neo 3 Pro and the Oculus Quest 2 have speakers integrated in the headband. Both headsets offer clear audio and good sound quality. I find the audio of the Quest 2 to be better as the sound is fuller and the bass richer.

Both headsets can connect to a computer either with a cable or via WiFi. In both cases it can be used as a PCVR headset.

The Oculus headset, as expected, does everything through the Oculus app, a 10GB install which also acts as a store, launcher and more.

To use the Pico Neo 3 Pro as a wireless PC headset, the Streaming Assistant application needs to be running on the computer. This is a simple application that allows you to choose video quality, whether to stream the mic and so on. Then, from the headset, you need to open the streaming app and select the computer where the app is running, which will then run and stream SteamVR. The whole process is very straightforward.

With the Oculus Quest 2, you need to enable Oculus AirLink in the experimental features. Then the headset can be paired with the computer through the Oculus app with a security code. This approach is arguably more secure than Pico’s, where the Neo 3 Pro can connect to any computer in the network which is running the streaming application.

Video quality is ok in both cases. On the maximum quality setting, compression artifacts were less prominent on the Pico, as the Quest 2 had some visible “film grain” all over the image. The image in the Quest 2 looked a bit sharper, possibly as a result of a higher streaming resolution or a sharpening algorithm.

The Quest 2 defaults to dynamic bitrate from 10 to 100 Mbps which can probably adapt to the network conditions and the displayed image. The bitrate can also be set manually to a specific value.

Streaming quality for the Pico Neo 3 Pro can be configured from the Streaming Assistant application. However, it is only possible to choose between Fast, Standard or HD video quality and between 72 and 90 Hz. No information on the actual bitrate is provided.

While it is possible for both headsets to be plugged to a computer to work as a wired PCVR headset, both companies use different approaches.

The Oculus Quest 2 can connect through a standard USB cable. An official Oculus Link cable is available which should provide the best experience. But since it’s still technically an USB cable, other alternatives might work as well. Oculus Link can then be enabled in the headset, which will then launch the Oculus app on the connected computer.

The Pico Neo 3 Pro instead uses a custom port shaped like an USB-C, where it is possible to plug a custom cable (sold separately) which splits into a DisplayPort and an USB connection on the other end. It is also possible to plug a charger (not included) to this cable to provide uninterrupted power to the headset.

For both headsets the image quality is very good and way better than the wireless implementation. In theory, the Pico should have an advantage, thanks to the DisplayPort connection which should provide an uncompressed signal. But there are caveats.

The Pico’s DisplayPort streaming app seems to be still at an early stage and might need to mature a bit before it shines.

Right now, everything appears a bit smaller in VR than it should be compared to the wireless version or other headsets. DisplayPort streaming only works at 72 Hz, which is a pity as it is already possible to stream at 90 Hz via WiFi. Finally, the SteamVR playing area is not stored correctly between sessions. Creating the chaperone in SteamVR is a far cry from just drawing a perimeter in passthrough, and involves annoying steps like laying the headset on the floor, or walking the perimeter with a controller in hand. It’s definitely not something one would like to do every time they boot up the headset.

I also encountered other issues that may be due to my specific configuration, though. When connected via DisplayPort, the headset “skips a frame” every few moments, resulting in annoying and immersion breaking flickers. The problem does not occur with wireless streaming, so it’s somewhat connected to the DisplayPort implementation.

Additionally, at some point the audio stopped working for me via DisplayPort.

These are all issues that can probably be solved with an update to the Pico DisplayPort streaming app. I hope fixes and new features will come soon, because the premise is great and the Pico would have the chance to be a better PC headset than the Quest 2.

The Pico Neo 3 Pro is designed for enterprise use, and provides a much more customizable platform than the Quest 2. No account is required to use the headset, unless one wants to install apps from the Pico store. Installing your own apps is as easy as it can be: just plug the headset via USB, then either push it or copy the APK to the internal memory, and install it from the headset’s file manager.

There are many ways to customize the headset, up to choosing your own launcher or fiddling with low level OS options.

The same cannot be said for the Oculus Quest 2, here the garden is well walled. You notoriously need a Facebook account just to be able to use the device. To enable developer mode so you can transfer files from your PC, you have to fiddle with yet another app installed on your phone. After that, the headset asks for permission to do stuff every time it’s connected to the PC. It is not possible to install a custom APK from the headset itself - it must be done from the computer using for example SideQuest. It’s not a hard process, but one more step to go through.

Pico also offers a variant of the headset, the Pico Neo 3 Pro Eye, which adds eye tracking and has 8GB of RAM instead of 6GB. The Pico Neo 3 Pro Eye costs slightly more than the base model, 749€ here in Europe. Still, there are not many headsets (if any) that provide eye tracking at this price. This is a highly sought after feature especially in the enterprise market, and it makes the Pico very attractive for a certain kind of customer.

The Pico Neo 3 Pro is indeed a very interesting headset. Its VR performance is good but lags slightly behind the Oculus Quest 2. Still, its additional features and freedom from the Meta ecosystem make for an attractive alternative. Enterprise users will like the longer battery life, better customization thanks to not being tied to a specific ecosystem and eye-tracking option. Consumers might be enticed by not having to create a Facebook account, but it’s also worth noting that the Pico store is way more limited than the Oculus store at this time, so the Quest 2 is definitely more attractive as a standalone headset. The Pico Neo 3 Pro is considerably more expensive than the Oculus Quest 2, priced at 599€ compared to around 400€ here in Europe. Still, it is one of the cheapest non-Meta standalone headset available - alternatives like the Vive Focus 3 cost twice as much, so that’s definitely something to consider.